Of Mines and Men in the Alaskan Wilderness, Alaska

Kennecott Mines inside the Wrangel-St.Elias National Park ..........Ramdas A. Iyer

All these years I had dismissed mining and prospecting as a dirty business constituting the back end of a shining industrial society. My recent trip to Alaska opened my eyes to the history of mining in remote regions where men either toiled for a fortune or just to pay for their next meal. As a traveler who primarily highlighted the natural history and geography of a region, I feel pressed this time to celebrate the industriousness and challenges undertaken by Americans in the 19th and 20th centuries that ultimately turned USA as a "golden city on the hill" for the rest of the world to admire.My training as a Chemical Engineer gave me additional insight and fascination with this plant. Also due to the presence of limestone in the nearby rocks, the sulfuric acid effluent was readily neutralized thereby avoiding acid leaching into a pristine environment.

In addition to my photographs, I have introduced some archival material to reflect the times when the mine was active. 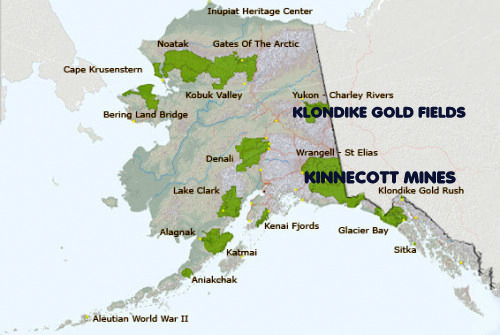 Arriving at Kennecott, Alaska famous for the copper mine and processing plant, deep inside the glacier lands of today's Wrangel-St.Elias National Park, I was astounded by mans innovativeness and determination to accomplish the impossible in a very harsh and intemperate corner of Alaska. The prospecting, mining, processing and shipping a very valuable metal prior to the outbreak of World War I is described here. As an amateur historian, I have culled information from various sources to tell you a wonderful story that I believe my readers will find fascinating.

Alaska, it seemed, was the scene of a continuing gold rush that started in the 1860s and extended into the early 1900s. The indigenous peoples in north-west America had traded in copper nuggets prior to European expansion. Most of the tribes were aware that gold existed in region but the metal was not valued by them. The Russians and the Hudson's Bay Company had both explored the Yukon in the first half of the 19th century, but ignored the rumors of gold in favor of fur trading, which offered more immediate profits - indeed, some of the first prospectors had to supplement their income with fur trading in order to survive.
In the second half of the 19th century, American prospectors began to spread into the peninsula. Making deals with the Native Tlingit and Tagish tribes, the early prospectors succeeded in opening up the important routes of Chilkoot and White Pass to reach the Yukon valley between 1870–90. Here, they encountered the Hän people, semi-nomadic hunters and fishermen who lived along the Yukon and Klondike Rivers. The Hän did not appear to know about the extent of the gold deposits in the region. 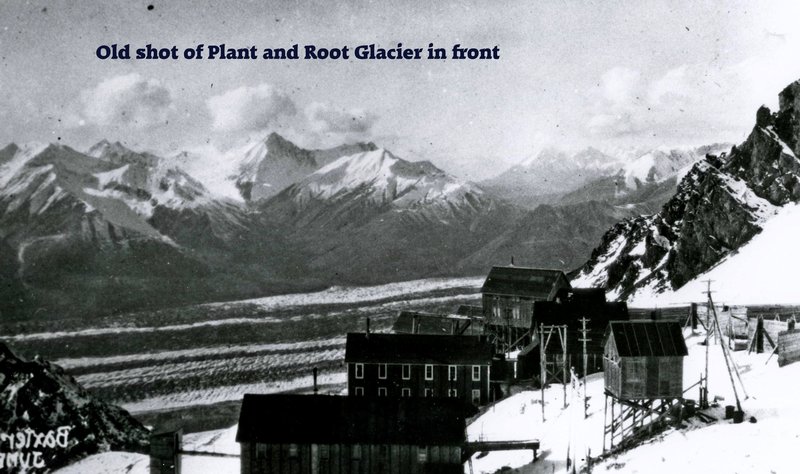 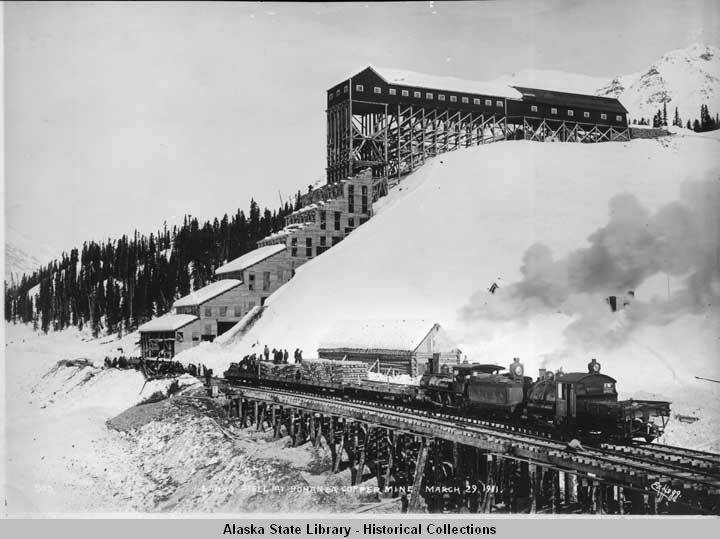 Following discoveries in western British Columbia, prospectors found gold in the Fortymile River drainage and at Birch Creek in the upper Yukon River area. The world heard in 1897 of the Klondike gold fields in western Canada. Two years later, discoveries were made on the Seward Peninsula, more in Interior Alaska, in Western Alaska along the Innoko River and in the Kuskokwim River drainage, and in northern Alaska in the Chandalar River area. Gold seemed to be everywhere in Alaska.
The Klondike stampede was an attempt by an estimated 100,000 people to reach the Klondike goldfields, of whom only around 30,000 to 40,000 eventually did. Migrants from over 40 nations were represented, mostly drawn from recent migrants to North America. It formed the height of the Klondike gold rush from the summer of 1897 until the summer of 1898. The migration of prospectors caught so much attention that it was joined by outfitters, writers and photographers Various factors lay behind this sudden mass response. Economically, the news had reached the US at the height of a series of financial recessions and bank failures in the 1890s. The gold standard of the time tied paper money to the production of gold and shortages towards the end of the 19th century meant that gold dollars were rapidly increasing in value ahead of paper currencies and being hoarded.[38] This had contributed to the financial panics of 1893 and 1896, which caused unemployment and financial uncertainty. There was a huge, unresolved demand for gold across the developed world that the Klondike offered to fulfill and, for individuals, the region promised higher wages or financial security. The Klondike rush lasted till 1903 when most of the gold was mined out. The events of the Klondike gold rush rapidly became embedded in North American culture, being captured in poems, stories, photographs and promotional campaigns long after the end of the stampede.
Alaska's mineral wealth was not just gold. Copper, coal, tin, platinum, mercury, and molybdenum were also found in Alaska. 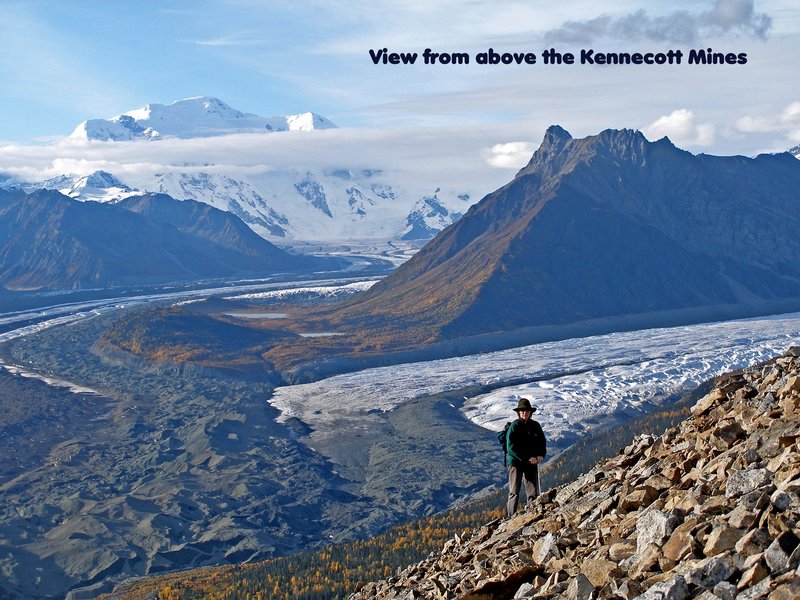 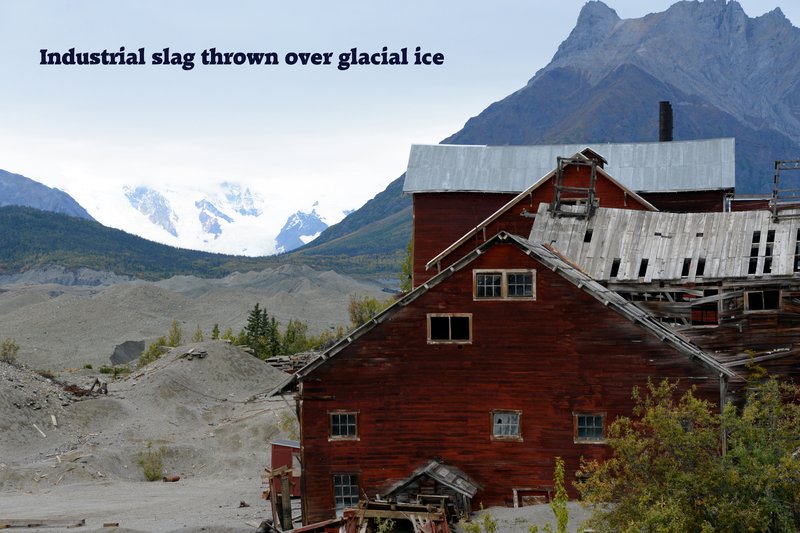 In the summer of 1900, prospectors Clarence Warner and Jack Smith were exploring the east edge of the Kennecott Glacier. As they drew closer to the limestone-greenstone contact, along which US Geological Survey geologist Oscar Rohn who had predicted copper would be found, they were amazed by the magnificent green cliffs of exposed copper. Samples from their discovery, the “Bonanza Mine Outcrop,” revealed up to 70% pure chalcocite, one of the richest copper deposits ever found.
Mining engineer Stephen Birch, went to Alaska to look for investment opportunities for the wealthy Havemayer family of New York whose interest he represented and began buying up shares of the Bonanza claim. However, without a way to transport the copper to market, it was worthless. Some said building a railroad from the coast, across mountains, powerful rivers and moving glaciers would be impossible. Others offered a glimmer of hope. The Havemayers collaborated with J.P. Morgan and the Guggenheim family, forming the Alaska Syndicate, to build a railroad 196 miles long and develop the mines. In the fall of 1907 the Alaska Syndicate hired Michael J.Heney, builder of the White Pass & Yukon Railroad. For the next four years his crews worked relentlessly, building rail bed and bridges through difficult terrain at temperatures down to 40 degrees below zero. At the same time, Stephen Birch was in Kennecott developing the mining claims. By hauling an entire steamship, piece by piece, over the mountains from Valdez to be reassembled on the Copper River, he was able to bring equipment in by dog sled, horse and steamship to begin mining ore even before the railroad was finished. 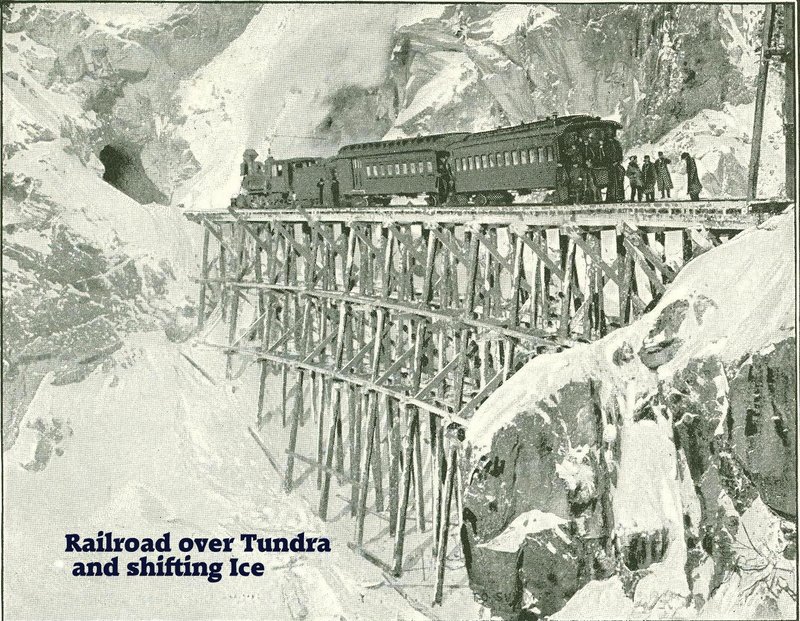 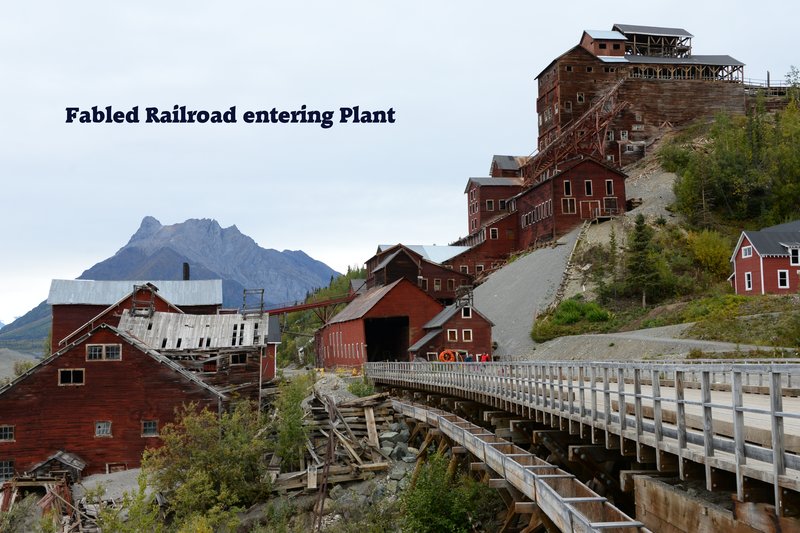 The first train left Kennecott in 1911 just ten days after the railroad was completed, filled with $250,000 worth of copper. Kennecott was a place of long hours and hard, dangerous work. At the height of operation, about six hundred men worked in the mines and mill town. Paying salaries higher than those found in the lower-48, Kennecott was able to attract men willing to live and work in this remote Alaskan mining camp. Miners often worked seven days a week, coming down only for the rare holiday or to leave Kennecott. Mill workers and miners came to Kennecott only to work, living in bunkhouses with little time off, often sending money home to their families around the world. Despite the dangers and grueling work, the Kennecott workers mined and concentrated at least $200 million worth of ore. Especially during World War I and the early 1920s, copper prices soared (to as high as 38 cents per pound) and so did profits. Underground, extensive tunnels connected the five mines; above ground, buckets of copper traveled via aerial tramways downhill from the mines several miles above to the concentration mill below, where the ore was crushed and sorted before being packed in burlap bags that were then piled in the open railcars bound for Cordova on the Prince William Sound. The ore was then sent to Tacoma,Washington for smelting. 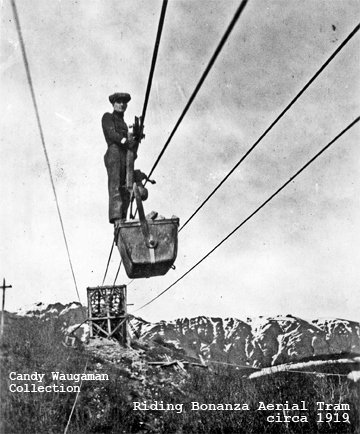 Reaping profits fueled by America’s high demand for copper, Kennecott Copper Corporation invested in mines in Chile and the lower-48. By the time the Kennecott mines closed in 1938 the
corporation had grown into one of the largest minerals companies in the world, due to the perseverance and ingenuity of its founders and engineers. 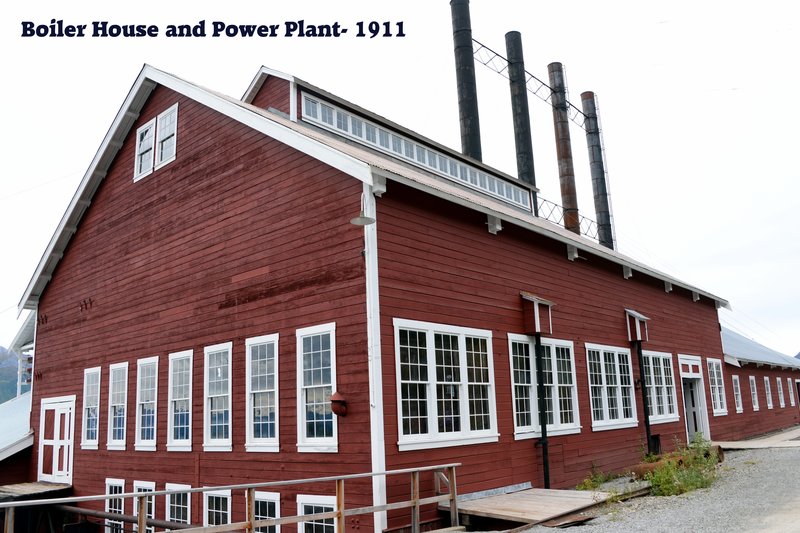 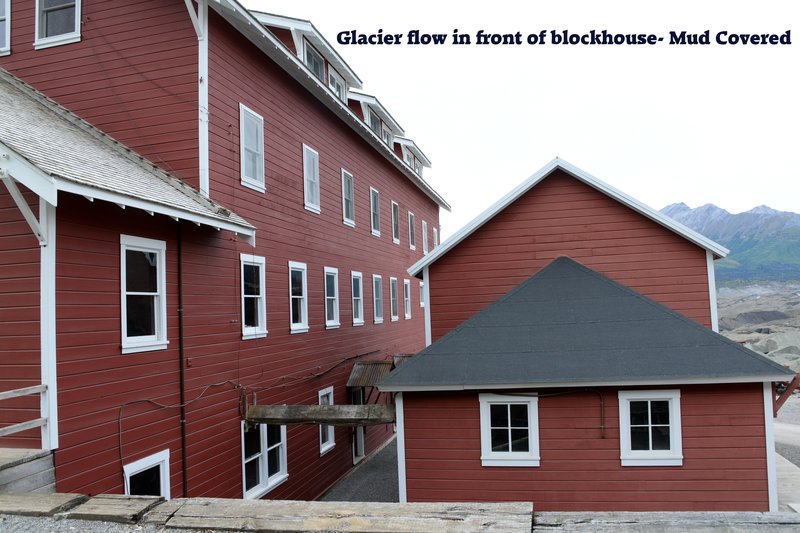 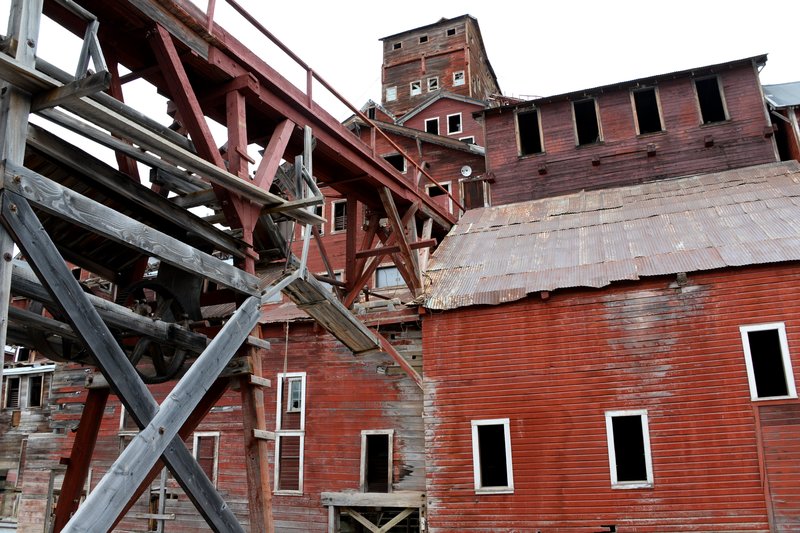 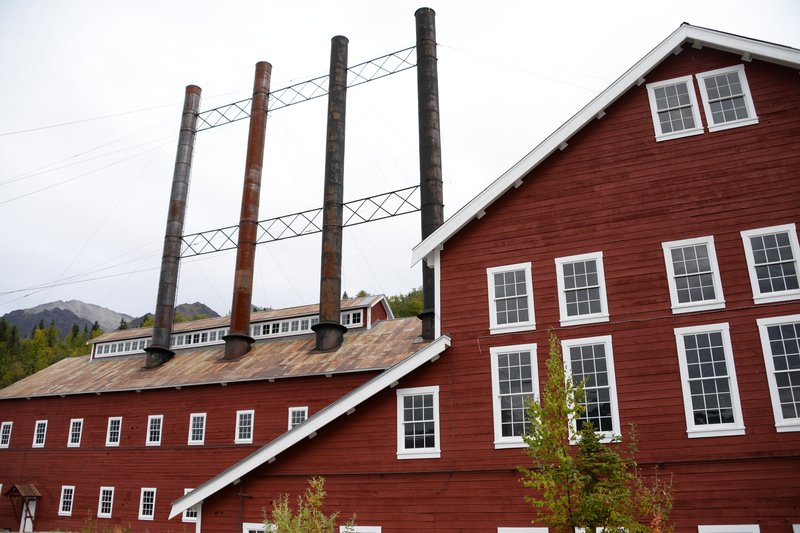 The Kennecott Mines National Historic Landmark includes the land and mining claims that formed the foundation for the Kennecott Copper Corporation, later the Kennecott Minerals Company. The operation had two components: the mines where ore was extracted from the mountains, and the mill town where the ore was processed. At the peak of operation, approximately 300 people worked in the mill town and 200-300 in the mines. Kennecott was a self-contained company town that included a hospital, general store, school, skating rink, tennis court, recreation hall, and dairy. The processing plant had nice facilities but the miners who mined 5 separate mines lived 3 miles away. Winter temperatures at the mine sites can plunge to 50-below—so cold that miners were said to find it warmer to sleep in the mine tunnels during the long nights of that long season than to bed down in their minimally heated dormitories.

The Kennecott mill town and mines are an extraordinary relic from America's past. The impressive structures and artifacts that remain represent an ambitious time of exploration, discovery, and technological innovation. They tell stories of westward expansion, World War I politics and economy, the lives of men, women, and children who lived there, and the rise of a multinational corporation. Each link in the historical chain connects to another until we realize that this remote Alaska mining venture was intricately connected to the world around it.
By the late 1920s, the supply of high-grade ore was diminishing, and Kennecott Copper Corporation was diversifying into other North American and Chilean mines. Declining profits and increasing costs of railroad repairs led to the eventual closure of the Kennecott operation by 1938. By that time, the corporation was well on the way to becoming a multinational giant. Today it is part of the the multinational Rio Tinto Kennecott Mining Company.
While reading up on the Klondike Gold Rush, I have been deeply drawn into the adventure aspect of this American experience. Stories of the Klondike and Kennecott experience affords the reader a glimpse into the low and high points of human morality in the quest for fortune and survival.
emailme @ ( riyerr@aol.com) 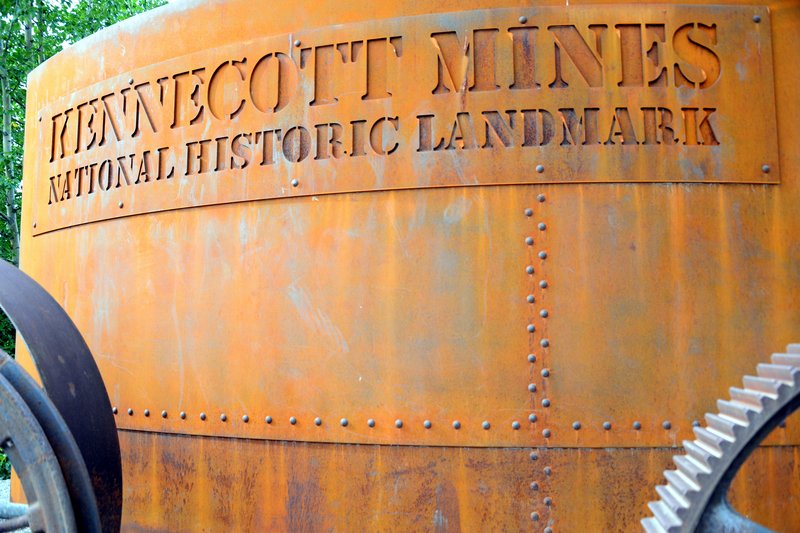 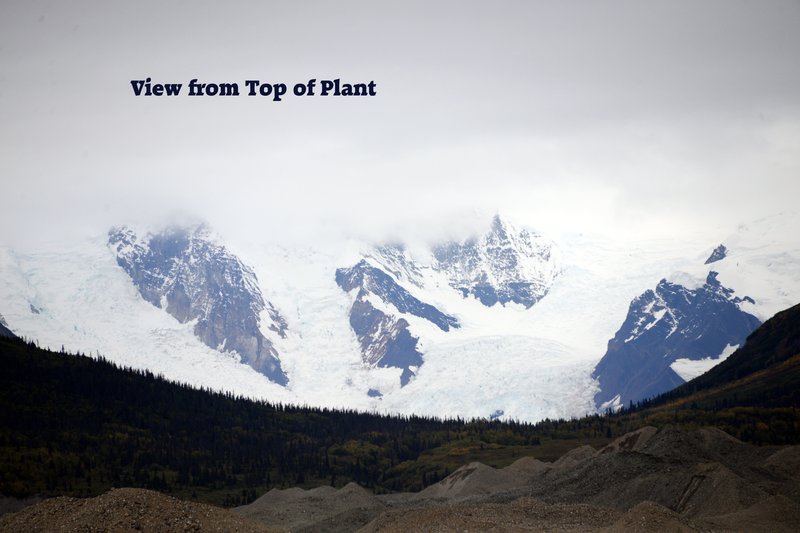 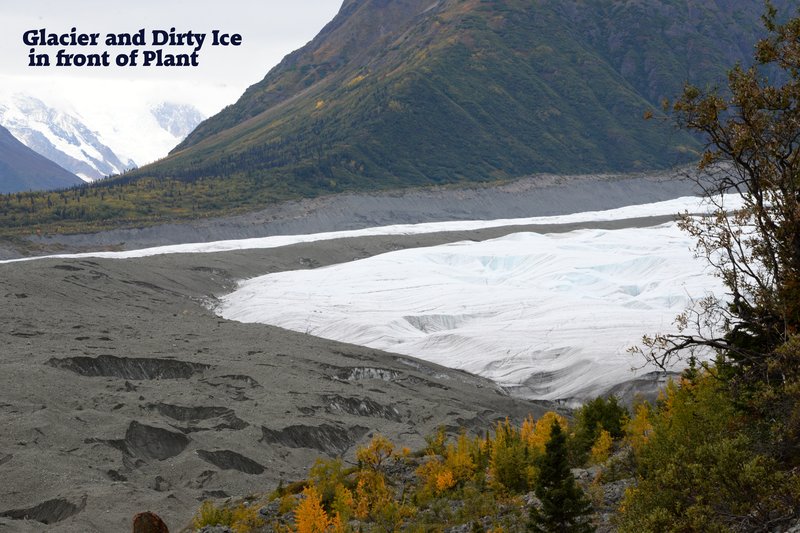 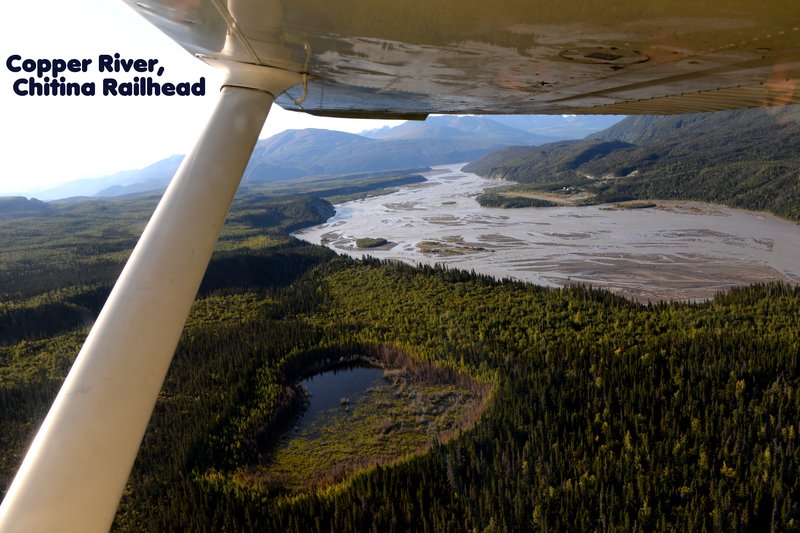 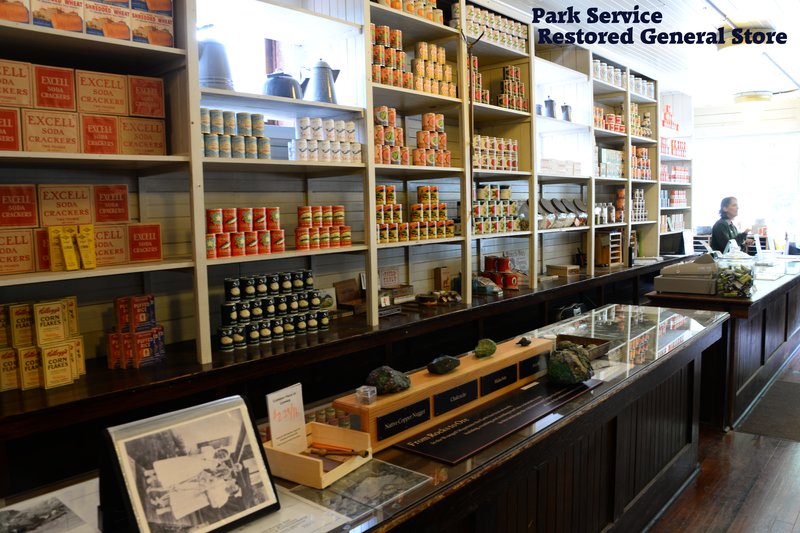 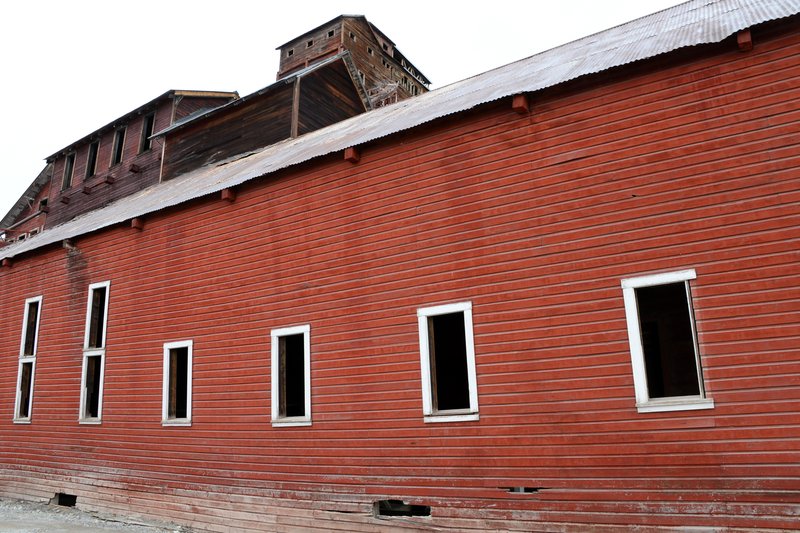 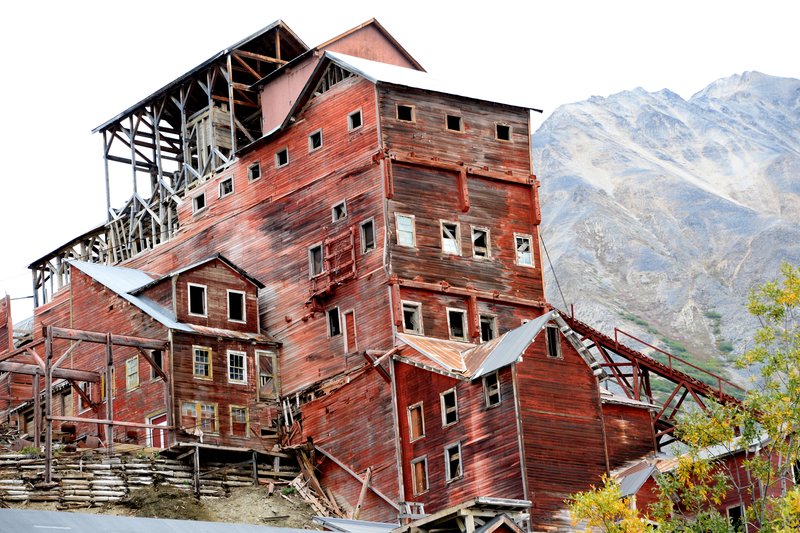 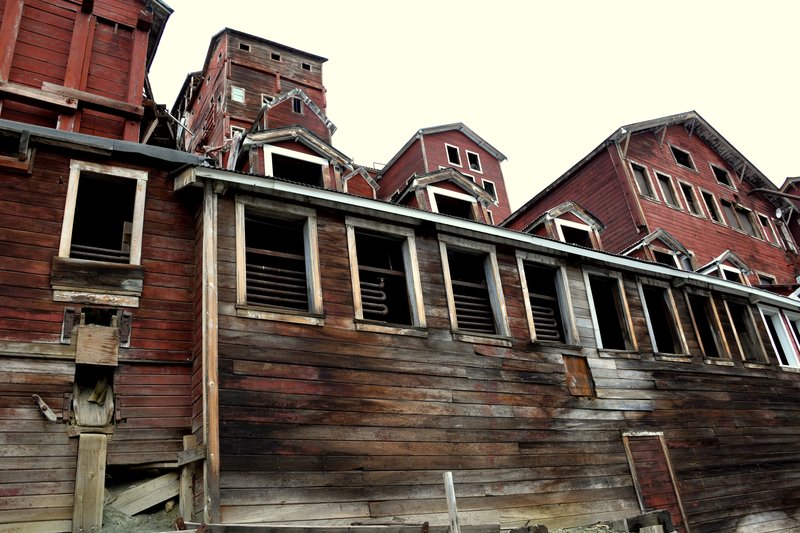 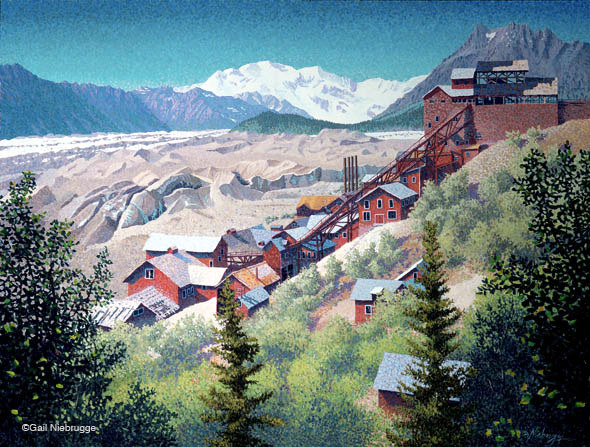 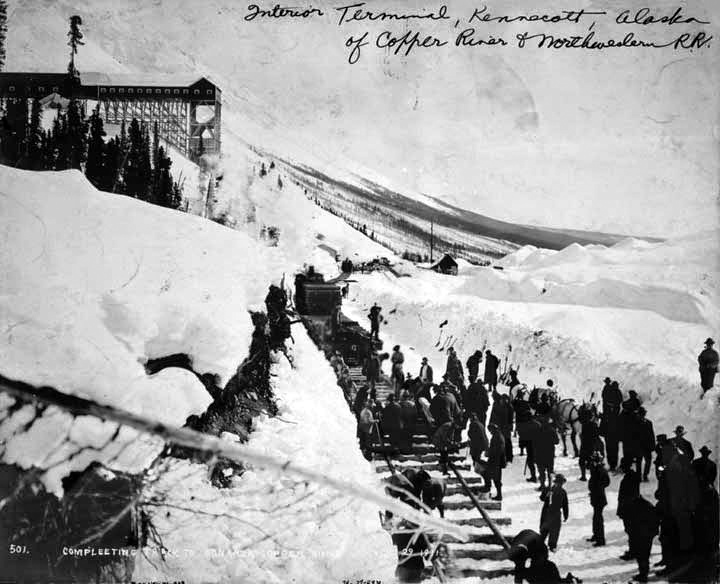 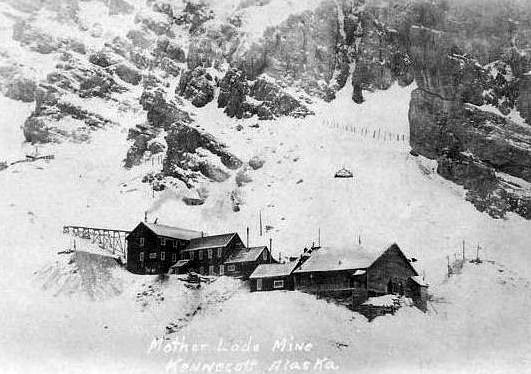 Nice photos Ramdas. What a tough life it must have been for the prospectors. I was reminded of the old Charlie Chaplin movie "The Gold Rush"?

A fascinating read that is well written as always. I found my imagination and wunderlust soaring.

Gotta check this place out on the next AK trip. Interesting post.