Amongst the Tuareg Tribesmen of Timbuktu

A Journey with the nomads of the Sahara.......Ramdas Iyer, Author 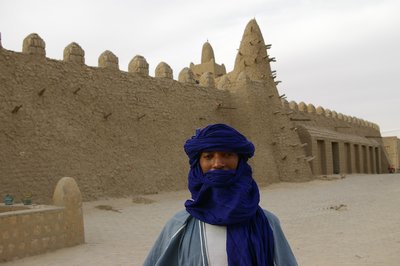 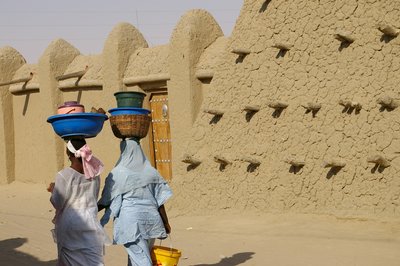 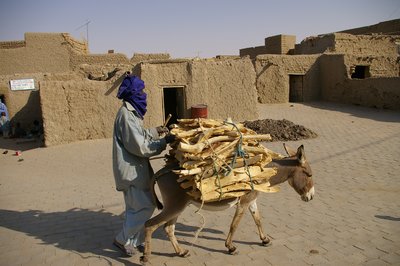 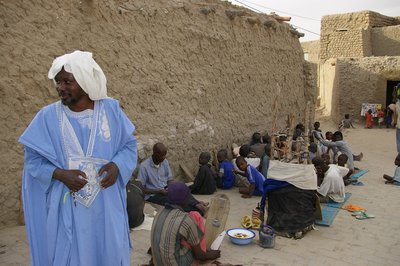 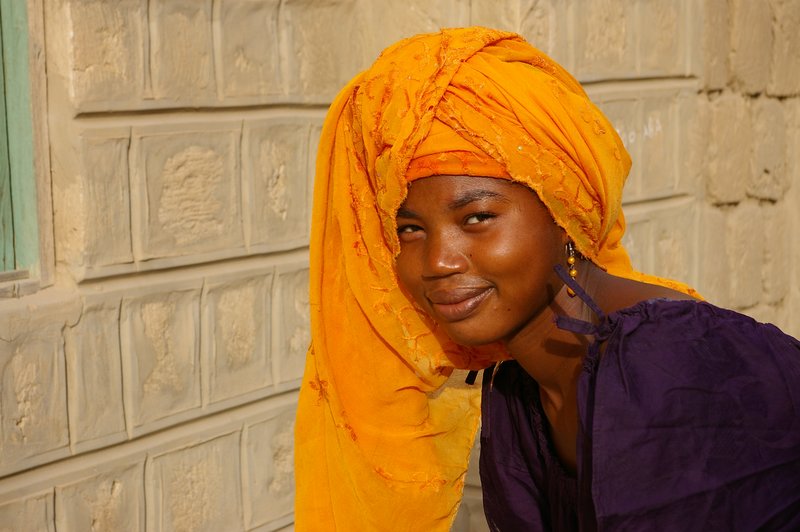 Timbuktu sits where the Sahel meets the Sahara. The Sahel is defined as “ the biogeographic zone of transition between the Sahara desert in the North and the Savannas in the south. It stretches across the North African continent between the Atlantic Ocean and the Red Sea. The Arabic word sāḥil literally means "shore, coast", describing the appearance of the vegetation of the Sahel as a coastline delimiting the sand of the Sahara.
While Timbuktu has scrublands and acacia trees around the city, it is only a few yards from the sand dunes of Sahara. Within 10 minutes of driving out of the town one encounters huge sand dunes and endless vista of sand, sky and scarab beetles marking their footsteps in the sand, while feasting on camel dung. 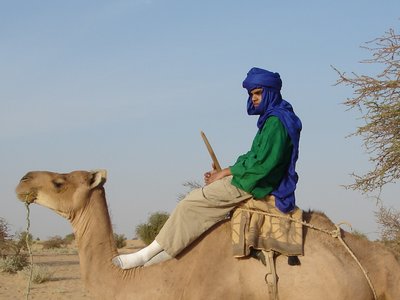 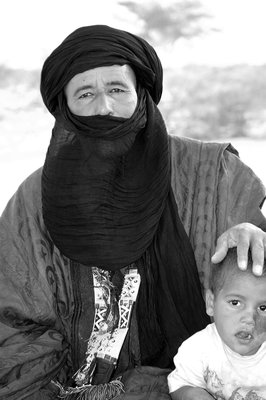 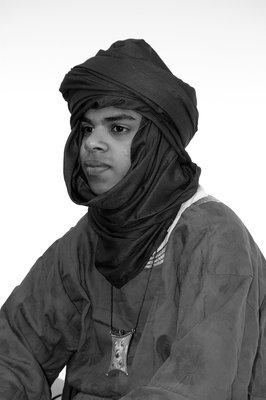 My son Arjuna and I visited a monument, which was rather unique. A few years ago after a bitter battle between the black Malians and the Arabic Tuareg had led to a dangerous stalemate in this area. After much death and destruction, peace was declared with the burial of 500 machine guns in cement. It was a rather graphic site for us simple folks who had never seen or handled firearms. We then visited the Sankhare mosque, a World Heritage Site, the ancient library housing Islamic works (paid by Ford foundation lest anyone forgets) and the town built on sand including a tour of the house occupied by the first British (or European) explorer to ever visit Timbuktu, Gordon Laing. The legend of Timbuktu was so great in the mid- nineteenth century that its discovery by the west was a prize to be had like a moon landing envisioned by the cold war USA.
In light of this importance, in 1824, the Geographical Society of Paris announced a prize of 10,000 francs (£400) to the person who first visited the African city of Timbuktu. Timbuktu was considered an almost mythical place, a city of gold nestled in the hostile lands of Muslim North Africa. Europeans were not welcome. Several expeditions had been financed from England, but no one had yet returned alive from Timbuktu – even Mungo Park, who had set off down the Niger from Segu (the regional capital of Niger and a place of great interest for the traveller) had been murdered. Animosity between British and French Geographical Society's existed over British explorer, Gordon Laing. There was vague evidence to suggest that Laing had successfully reached Timbuktu in 1826, but had been murdered shortly after leaving. In 1828, René Auguste Caillié was the first European to return from the fabled city.
Caillié settled in a Muslim community on the Rio Nuñez, Guinea, the land made famous by another Frenchman Dominique Strauss -Kahn of the IMF, by allegedly raping a Guinean woman in NYC this summer, to learn the language and customs. After three years he felt confident enough to join a caravan heading to Timbuktu, disguised as a Muslim, and carrying a minimum of supplies: a single bag of trade goods, an umbrella, compass, medical kit, and a journal. He dismissed his poor language abilities by saying he was an Egyptian, kidnapped by Napoleon's army and taken to France to be raised amongst the heathen.
His entrance into the fabled city was a disappointment: later describing the view as "a mass of ill-looking houses, built of earth." Caillié stayed in a house only one street away from that where Gordon Laing had slept the previous year, and was shown a compass said to belong to Laing.
After spending a fortnight in Timbuktu he joined a caravan crossing the Sahara to Morocco, reaching Fez in 3 months. From Tangier he returned to France. Caillié was the first to accomplish the journey in safety.
I take pride in our visit given its rich history of exploration, intrigue, murder and trade. Today with sufficient interest, money and a willingness to endure relative discomfort one can get to Timbuktu with relative ease. I will never forget some of the local restaurants along the way for the sheer grossness of the kitchen, plates and offerings. I can recollect having a sandwich in a small restaurant along the way to Timbuktu operated by a French returned Malian. While the food depending on electricity available was tolerable, the kids all around the restaurant were playing with real dead fish, real dead birds and real dead rodents. 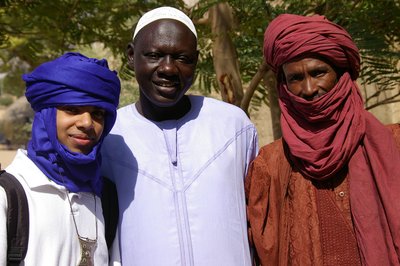 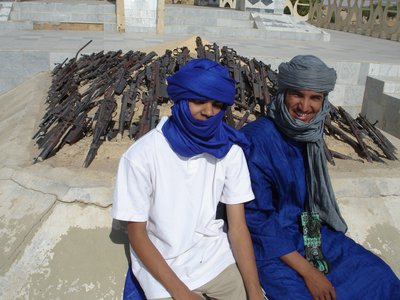 After truly enjoying the tourist offerings, our Tuareg guide Bebe and Malian guide Mama Kone offered to take is up to 20 km into the Saharan sands by 4X4 to visit nomadic Tuareg tents. After 30 minutes of driving we came upon a small community of about five tents who shooed us away, the heathens. While this is not new to Bebe, he was looking for a more amicable community and we found one. With Arjuna dressed like a Tuareg he was confused for an Omanian.
A small rug was spread on the shaded side of a tent and sweet tea poured by the elder. The women in purdah while curious did not approach near us. However a very bratty young man dragged his paramour near us and displayed affections like hugging and kissing while she was shy and running away from it all. (See pictures). We took pictures of them all and showed it on the digital camera display, which was a big hit that drew the rest of the women near us. 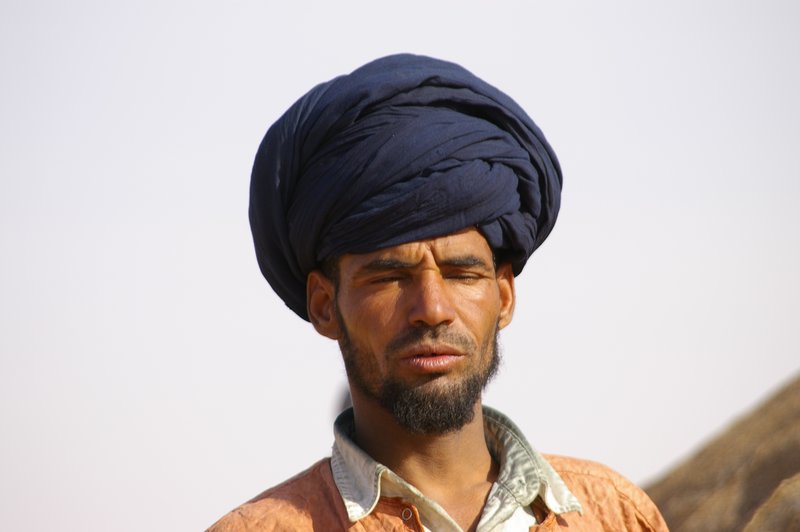 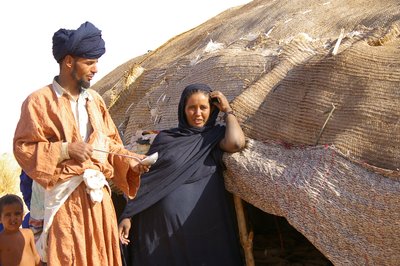 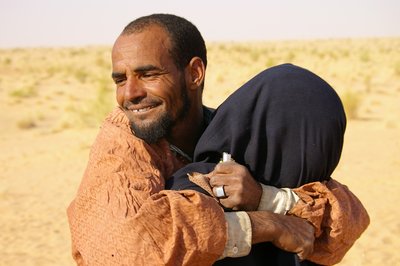 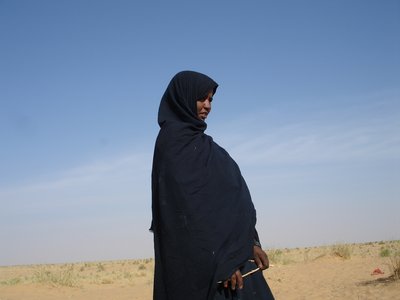 We observed a 8 year old boy with a broken jaw and a festering wound in his face, We were told that a camel had kicked him and they had no way of treating him. Though not very smart, I gave my entire bottle of Tylenol to the father with Bebe instructing on treatment. That would have been a $15000 job with a New Jersey dental surgeon treated with a bottle of Tylenol..
The people were genuine and meeting each other was a privilege of globalization. As we moved on we stopped at a bore well for refreshing ourselves. Much to our amazement it had a stencil that said Mali- India, an Indian aid program to poor Africa, We drank to our heart’s content- Malian Saharan water through Indian largesse. 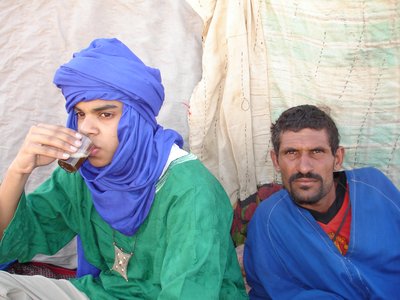 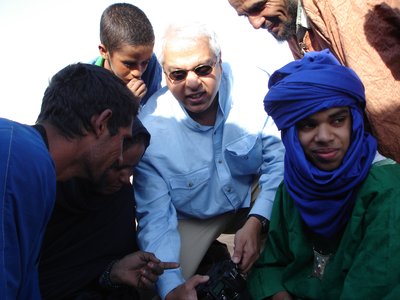 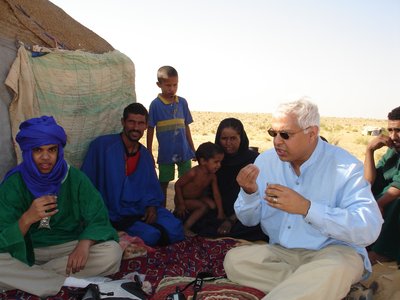 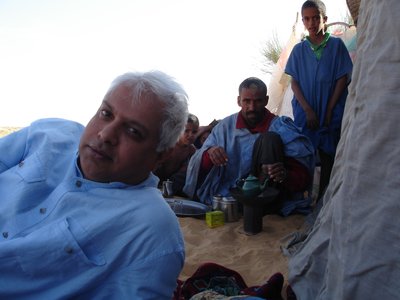 Along our travels, we stopped at a local chief’s compound. While the poor Tuaregs move about, the rich sheep and camel owning Tuaregs stay in one compound and conduct business in Timbuktu by taking deep forays with their their camels. This chief offered us a chance to sample riding his camels, served tea in a very relaxed and informal setting while his three wives were cowering in various parts of his compound lest the evil eyes of a heathen cast his stare on their veiled beauty! 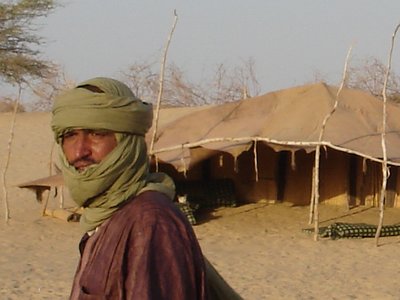 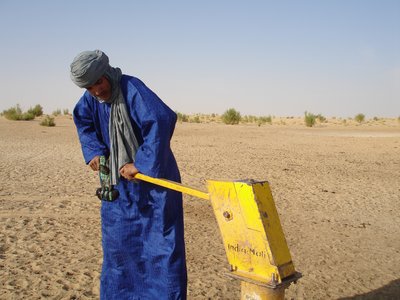 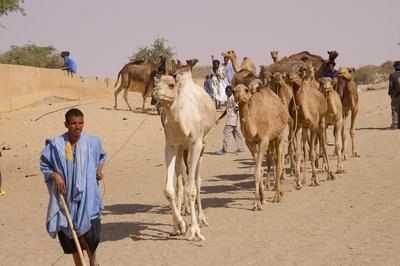 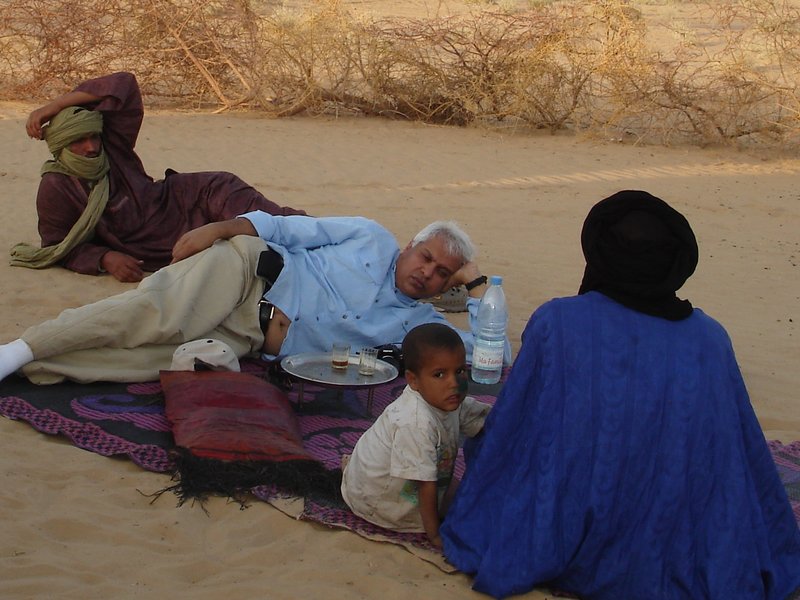 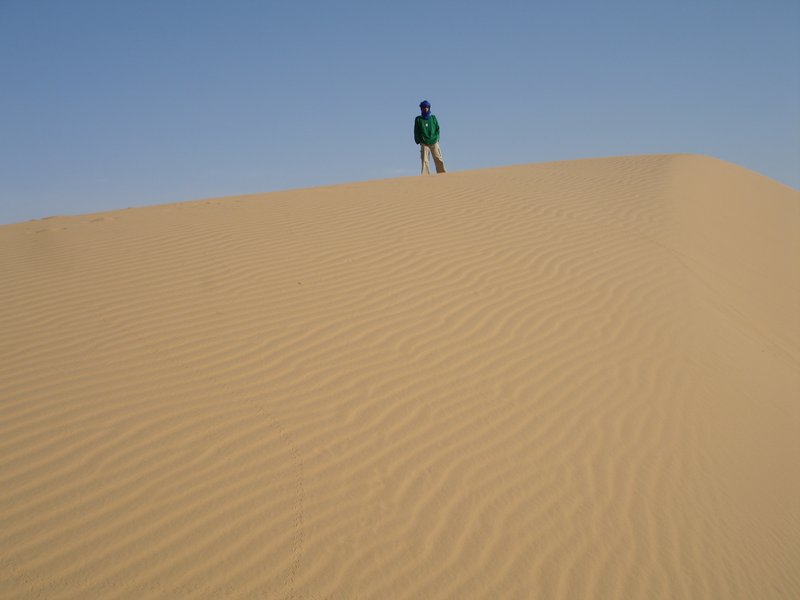