Nuclear thief in Timbuktu: A journey to the Sahara 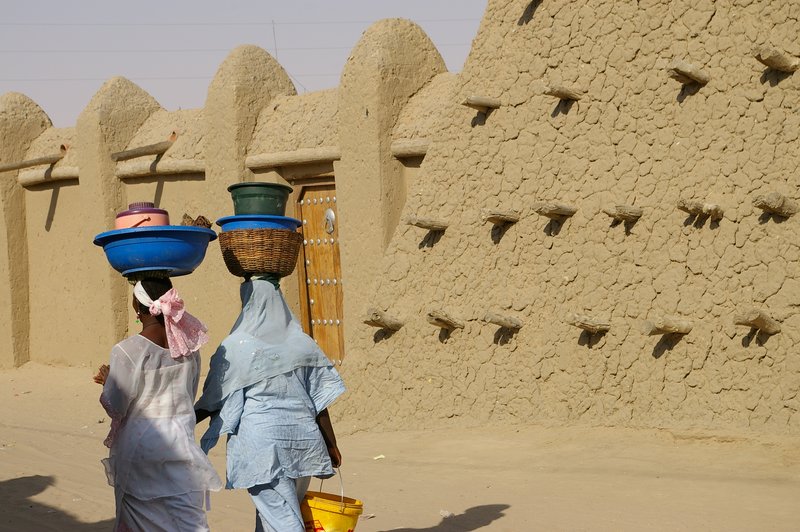 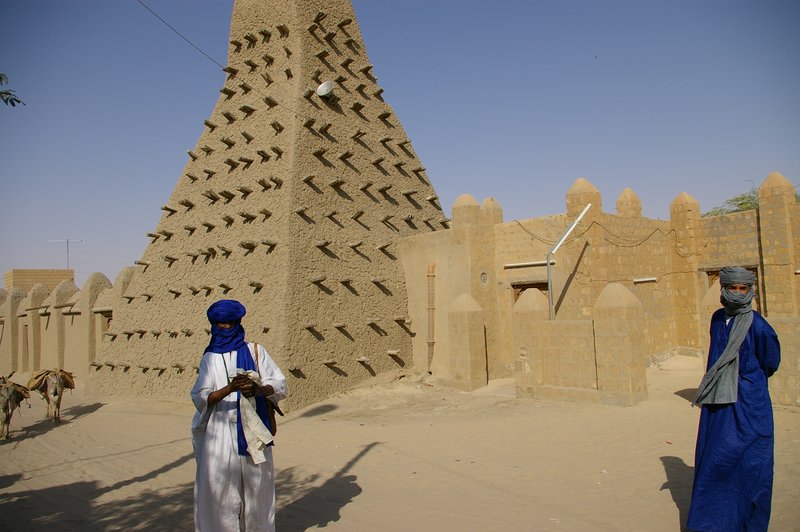 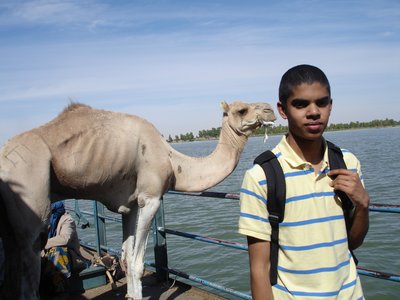 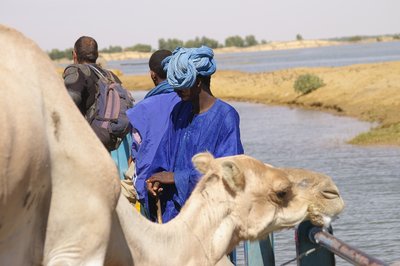 Having grown up in India, I often reminisce about my elders and their usage of idioms. My uncle Krishnan Periappa often used the term “It is like going to Timbuktu”: whenever god-forsaken places were mentioned. I now realize that it was indeed an old English adage,” As hard as reaching Timbuktu". The successes of Victorian English conquests of Africa somehow did not bear fruit in Mali. Disease, terrain and cruel rulers along the Niger kept them from reaching the fabled city of Timbuktu until late 17th century. This led to this usage in the Anglophone world. My preparations for my own conquest included reading the book by Kryza, F (2007) The Race for Timbuktu: In Search of Africa's City of Gold. HarperCollins, which gave me a sense of adventure, that brewed constantly in my mind and that of my young son Arjuna, my companion on this trip.

After a long rough terrain drive and a crossing of the Niger River, Arjuna and I arrived in the fabled city of Timbuktu. Followers of history may know that this was a 13th century center of trans Saharan trade and its many madrassas produced scholarly Islamic works. The Sankhore Medrassa is a World Heritage site where important astronomical observations were made. As a center of gold, ivory and slave trade its long reach influenced governments in 16 Th century Tripoli and Cairo. Its inhabitants were the Songhai people and the Empire of Songhai came under pressure in the 15th century by the Tuareg people of Arab descent who until recently formed the local majority.

The West African tribes which include the Bambara, Bobo, Bozo, Fulani and the Dogon often preyed on each other for the slave trade and handed their captives to the Arabs near Timbuktu.

While planning our trip and researching Timbuktu I and came upon an article in the Times of India about the Hotel Hendrina Khan, where we planned to stay. The excerpts from Google search of that article is attached herein:

Feb 1: 2004 “ISLAMABAD: The architect of Pakistan's nuclear programme Abdul Qadeer Khan, who has been sacked as scientific advisor to the Prime Minister, had amassed properties at home and abroad besides building a "fabulous" hotel in an African nation where he transported furniture by an air force plane.

Hendrina Khan hotel, named after Dr. Khan's Dutch wife, in the city of Timbuktu in the African state of Mali was one of the dozens of business undertakings of the nuclear scientist that were now being investigated by Pakistani intelligence officials to verify allegations by International Atomic Energy Agency (IAEA) that the country's scientists collaborated with black marketers of nuclear technology, The News daily said.

It said the probe revealed that not only did Dr. Khan build a hotel in Timbuktu but used Pakistan Air Force's transport aircraft C-130 in early 2000 to ferry an exclusive range of carved wooden furniture from here to his hotel. 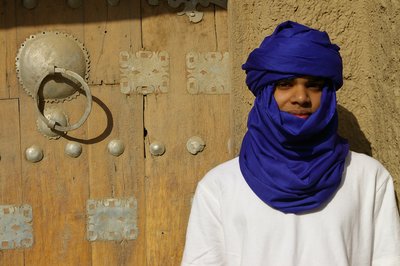 The aircraft landed at Tripoli airport in Libya and the cargo was then taken to Timbuktu by road, as it could not land in Mali. Dr. Khan himself accompanied the furniture from Islamabad.

Dr. Muhammad Farooq, a centrifuge expert at the country’s premier nuclear installation, Khan Research Laboratory (KRL), revealed the details of the trip. Dr. Farooq is one of the 13 scientists and officials of the KRL interrogated by the investigative agencies.”
That evening we met the owner of the hotel who was a puppet of A.Q. Khan and was extolling the virtue of a great scientist who was his partner. While seething under my skin, I played the part of a curious listener to hear the story of an international criminal being praised by an under educated simpleton. 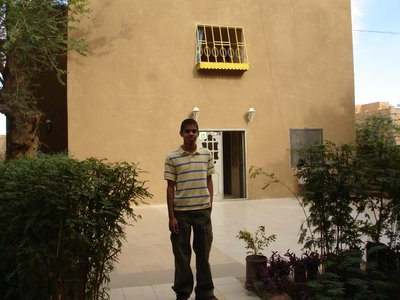 So after all the excitement we made our first foray into the town. Perhaps the only town that is built on sand, as there are no paved roads but just sand everywhere. It was awesome. The town had as many camels as there were 4X4’s, the only means of transportation to the interior. Our local guide Bebe, a young Tuareg man humored Arjuna by dressing him in Indigo turban (see photo). The Tuareg of the Sahara were known as the Indigo men as they were caparisoned in Indigo cloth, a dye that is made from a natural dye extracted from a desert plant. The 1850’s Levis Blue jeans were originally made with this dye until it was later synthesized.

We got our first thrill when Bebe introduced us to 4 fearsome looking Tuaregs with curved knives in their waist. They had just returned from a forty day return trip to the salt flats of the Sahara, an ancient sea bed, A train of thirty camels walk 500 miles to Taudenni to bring back salt which was worth its weight in gold until 50 years ago. (Read this National Geographic article http://news.nationalgeographic.com/news/2003/05/0528_030528_saltcaravan.htm). Even today, Mali being a land locked country depends on Saharan salt brought by camels carrying 400-500 lbs. each. It is then distributed to the interior by donkeys and mules carrying 100 -150 lbs. each. Having a young son dressed in Indigo turban amused the traders that they invited us the next day to their camp and since they had traded some goods along the away they promised a nice Tuareg outfit for Arjuna. 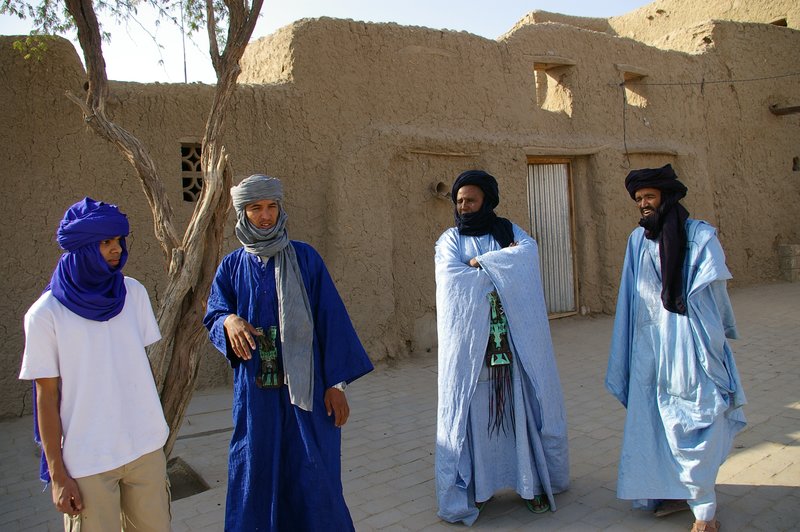 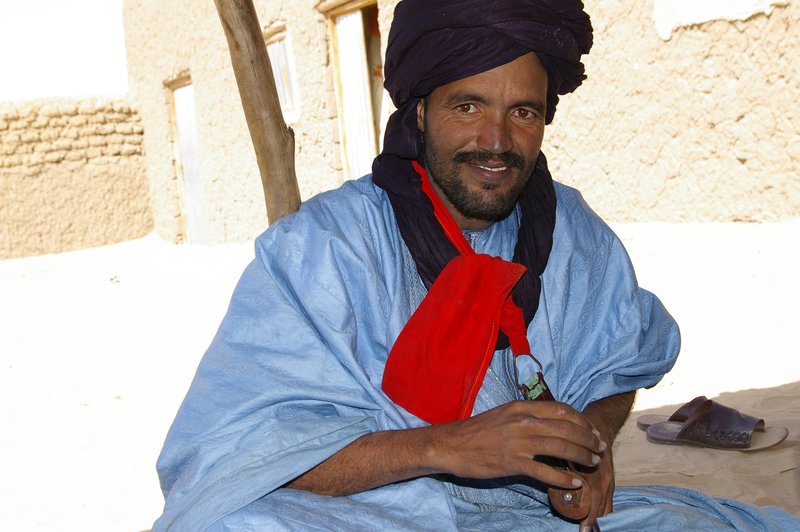 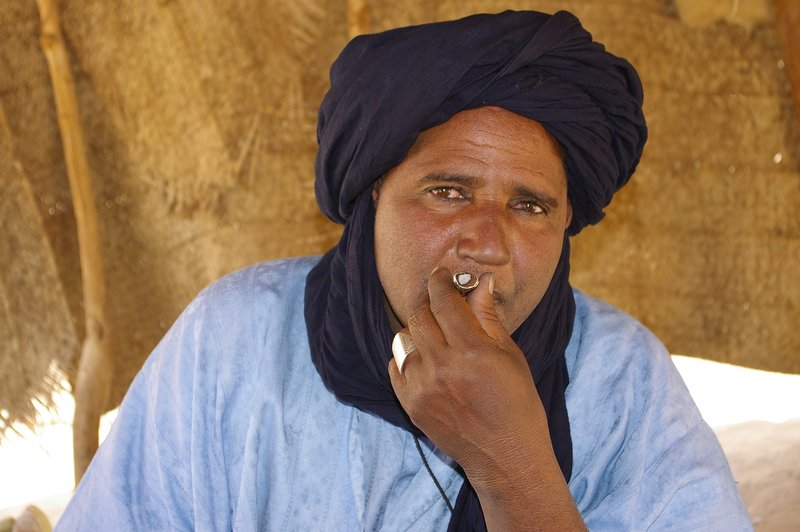 The next morning we walked from our hotel into town where freshly slaughtered lamb was broiled in small domed ovens all along the road. We picked some tender pieces, wrapped in some French newspaper and walked to the Tuareg Indigo men's tent. WE sat around a bunch of handsome and feisty looking Arabic salt merchants. They offered us very sugary tea with dried camel cheese to cut the sweetness. We opened our meat offering and we all ate very elegantly from the newspaper. Dining traditions are a good example of culture. Despite sitting in a tent, in the Sahara with a bunch of tribesmen, the picking of small morsels by every one and not showing greed was a very interesting observation of mine. This I would not expect in Papua. While I had visions of D.H. Lawrence, I must tell you that this amazing meeting and talking to the traders through Bebe was a fantastic moment in our trip. Arjuna took the time to inspect their swords and accepted some camel cheese to take back to school. A native cigar mounted on a silver holder was also passed around. 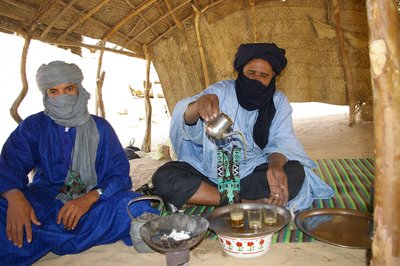 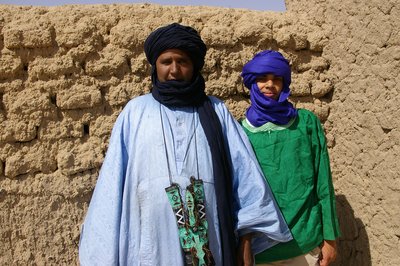 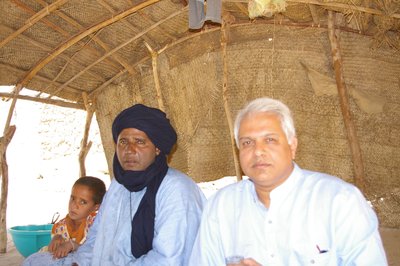 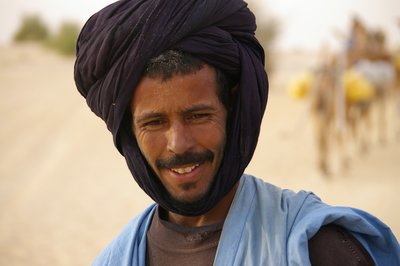 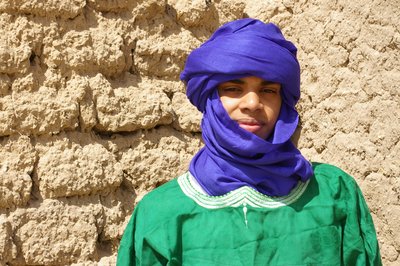 The leader sensing that the conversation did not extend beyond the tea and meat, brought out a classic green tunic of the Tuaregs and an amulet from a trunk, that had Koranic versus for protection from the Djinns of the desert, for sale. He had a small size purchased from traders for his family who lived in the middle of the Sahara about 40 KM from Timbuktu. (See Photos) .A mere $20 (but a huge fortune) exchanged hands since an entire 40-day trip into the desert to fetch salt only yielded $40 per traveler. Bebe did mention that whenever he got a chance, he introduced the rare travelers to the area to meet such people. There are no group travels thankfully in this area and a group has to travel in several 4X4's. The joy of traveling alone exposes one to so many opportunities not available to many.
Emailme at ( riyerr@aol.com) 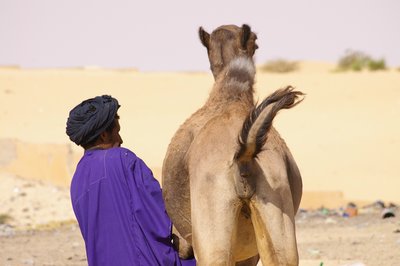 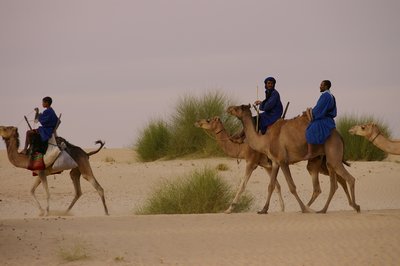 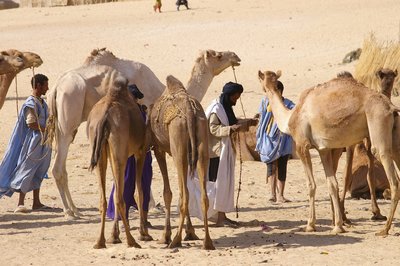 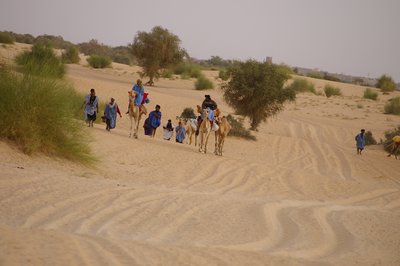 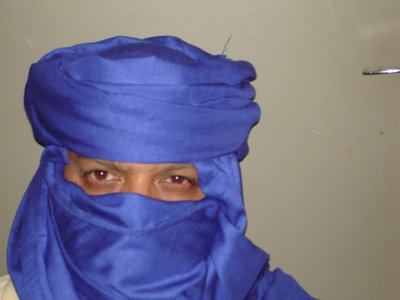 Thanks Kash. I travel for adventure and when scandal is thrown into the brew it certainly produces a tasty bouillabaisse.our Mali trip is one that can never be replicated.It is much more "globalized" today,which means that it is not fun traveling seeking raw adventure anymore. I realize that Africa is the place for discovery but it is also fraught with uncertainties that only a mad Englishman.or a culturally astute Frenchman would venture. our own trip to Peru in the 1990s was unique.