The Funeral Masquerade Dance of the Dogon, Mali

A vanishing tradition of a fascinating people by Ramdas Iyer 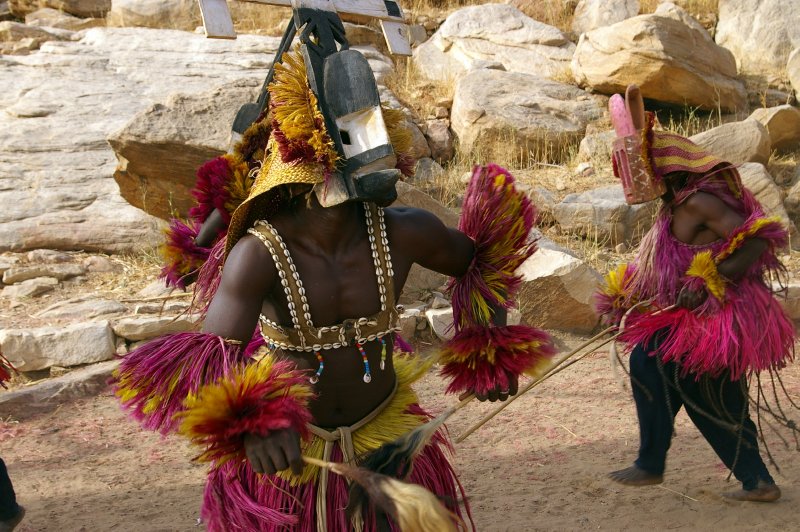 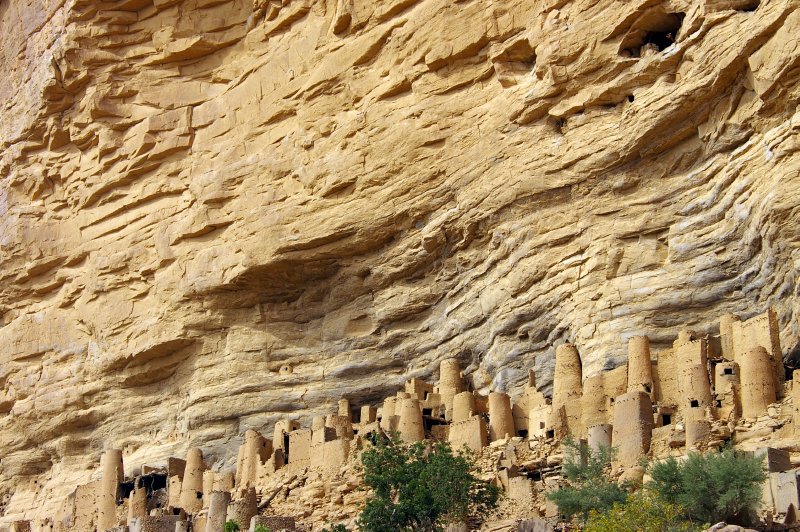 Any visitor to our house will appreciate my large collection of African art: especially that of the Dogon people. West Africa is such a rich cultural place that rapid Islamization, past Christian conversions and pressures of a modern world, I imagine, will soon dilute this richness. Self ordained as a world traveler I was searching hard to find an untouched part of Africa to travel to and decided on Mali, home to the Bambara, Dogon, Bobo, Bozo, Songhai and Arabic tribes like the Tuaregs. My biggest fear was to obtain permission for Arjuna to miss school for 2 weeks in order undertake this adventure: the Principal at Randolph High acquiesced. 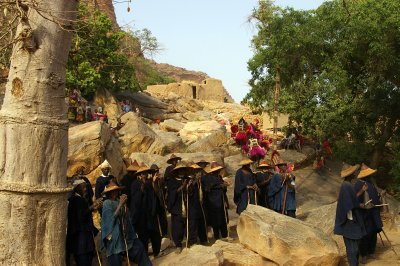 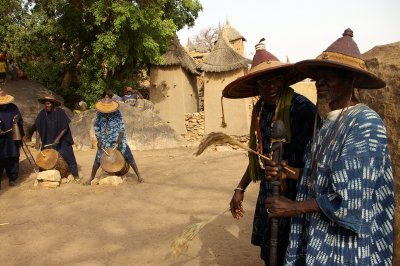 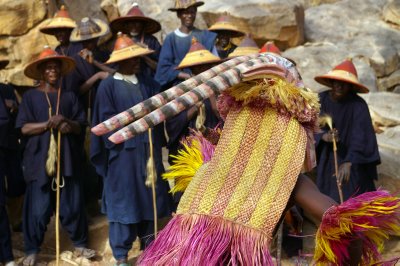 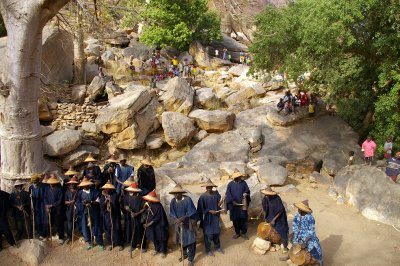 The Dogon live on the Bandigara Escarpment, a sandstone cliff up to 1640 ft high stretching 90 miles on the Sahel desert. A world heritage site for its unique cultural achievements, the escarpment is 500 miles from Bamako, the capital. These villages were established around 900 AD as a result of the collective refusal of the Dogon people to convert to Islam. The escarpment gave protection from frequent Islamic slave raids common in West Africa until the late 17th Century.

The 4X4 Toyota land Cruiser was well suited for the rough sandy tracks that led us to the escarpments. The scenery was absolutely stunning with semi arid grasslands, sandy desert, Baobab trees, rocky out crops with small villages amidst. Over the years the Dogon had descended from the escarpment and set up villages 50 miles around it. While they were still the Dogon, the real deal was awaiting us a few miles ahead. Mali is perhaps one of the poorest countries on Earth, yet the people express their joy of life through art found in everyday objects like knives, catapults, combs, seats, hoes, pots and pans. While my birth place India is culturally rich I do not see art in day to day implements and tools. I often wondered why this was the case and my conclusion is this: The Dogon has no centralized Government but live in villages composed of patrilineages and extended families whose head is the senior male descendent of the common ancestor. Having no kings or local warlords to hold the villagers in servitude and render them extremely poor like the villagers in India, social art blossomed to unparalleled levels. In fact cubism and modernism in art “invented” by Picasso, Kandinsky et al have been attributed to their exposure to West African art. 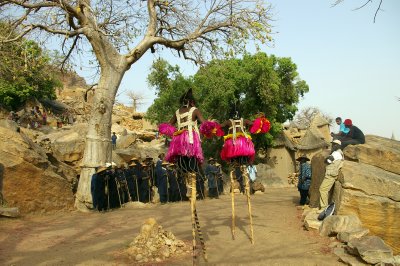 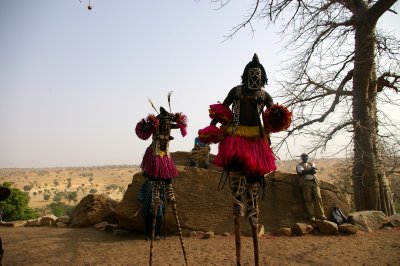 I can keep going on and on and will now come to the point of the “Funeral masquerade dance of the Dogon”. We were approaching the village of Yuga-Piri, set at about 500 feet above the ground. We were welcomed by the head man and a meal of goat and millets was arranged by our guide Mama Kona. Most of the masks in our home are those from this funeral dance. So I asked the headman if one such dance could be arranged. It was about 11:00 AM and he negotiated a price of $150 to be paid to the village and that it could only happen around 2:00 PM since all the dancers were working the fields below. So we had our meal and reed mats with dirty pillows were laid out under a makeshift roof for us to rest till the dance. This village was spectacular in beauty and cascaded down the cliff like a fairy tale land. Around 1:00 PM drummers stood in various corners of the cliff and started drumming to summon the field hands to the head mans hut. Within a matter of 45 minutes we could see all the elders wearing Indigo cloth come out of their abodes and stand in the “Navel”of the village, an area cleared for dance with a central rockpile built conically surrounded by trees with the high cliffs on one side and the endless Sahel desert below. (The Sahel is scrub desert that slowly becomes white sandy desert another 200 miles out. The Sahel supports more than 90% of the sub-Saharan people because of its ability to support some plants, trees and grass for livestock.). The drummers and the bell bearers started their unique trance inducing beat. 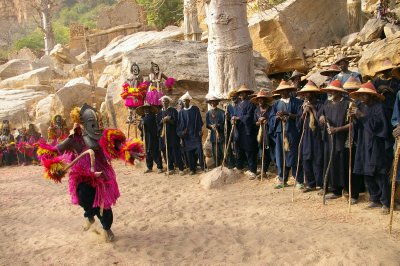 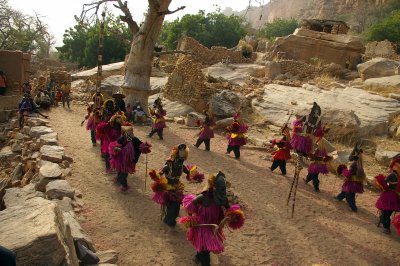 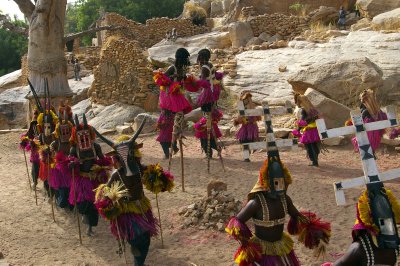 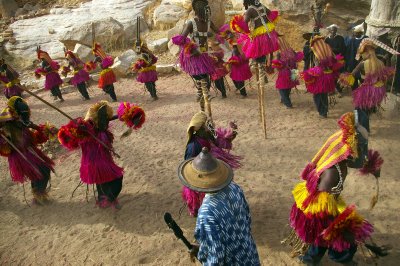 Soon the dancers numbering over 35 poured out on all sides. It was simply unbelievable that these great people would perform one of their sacred funeral rite dances for Arjuna and me. The village Ogon-shaman, blessed the site and blessed the dancers. A jury of a dozen elders stood in a straight line to ensure correctness of protocol and dance proceedings, with long sticks in hand. They could correct any errors made during the dance with a gentle tap of their sticks on the dancer. The dance began with ritual storytelling and more and more characters entering the arena. They were walking, shaking, hopping, swaying rhythmically that I was running around trying to photograph one of the greatest events I have ever witnessed. Arjuna was perched on a high rock enjoying with utter fascination. Men on stilts wearing wooden breasts, hunters, animals, spirits and forebears were all in the story. This Dama ritual essentially leads the souls of the departed to their final resting place. During a real funeral the masqueraders would dance on the deceased rooftops, throughout the village and the areas around the village to settle the spirits of the dead. Sometimes there are mock battles with the spirits who come to disturb the proceedings.
I cannot explain the joy I felt to be a part of this great ritual which was unfortunately being performed for a tourist. These dances are performed annually and the headman thanked me for giving them an opportunity to practice. The privilege of dancing is granted by a headman only if the dancer exhibits certain moral values. So becoming a dancer is one of the great social achievements of a Dogon Male. (There is a BBC documentary about a young man trying hard to be a Dogon dancer). 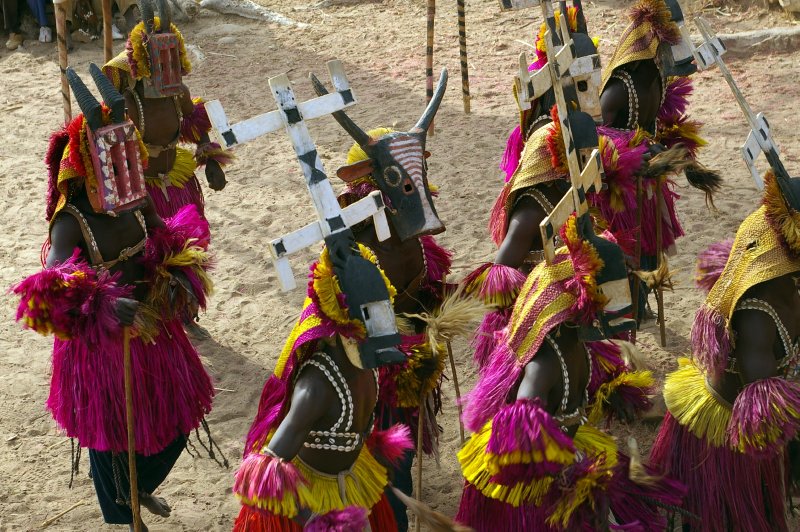 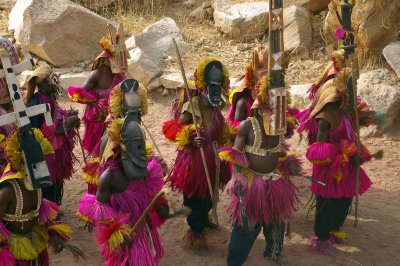 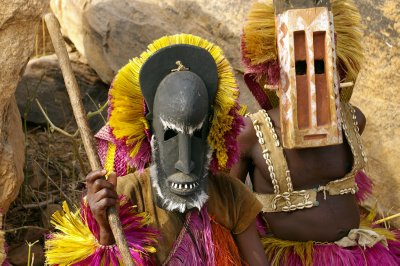 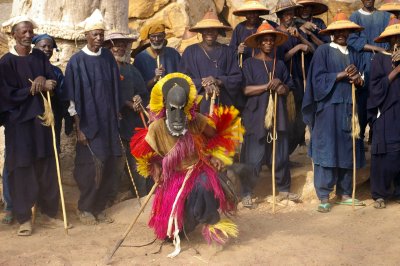 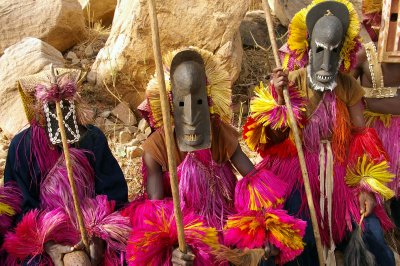 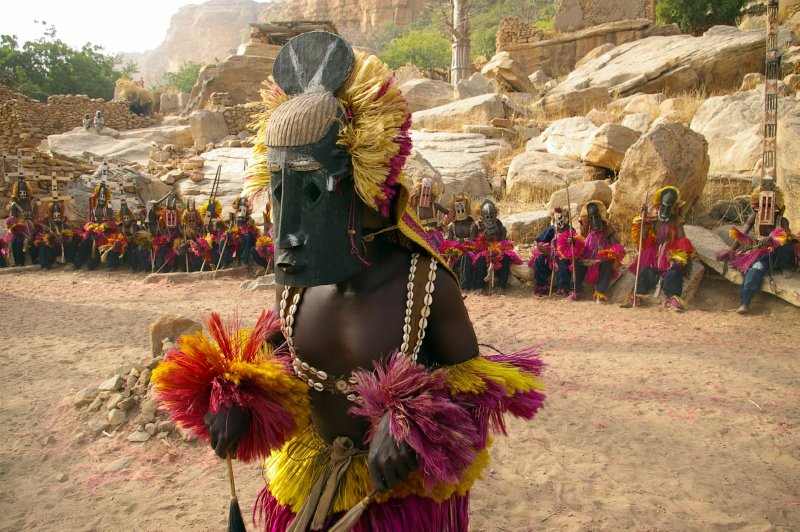 All the masks used were actually carved by each dancer. I wondered how they could fit snugly on their head during all their gyrations, but found out that they secured them with their teeth while dancing. These ritual masks are kept in caves located on the cliffs high above the village where their ancestors are placed. I also found out that prior to the dance, between11:00 AM and 2:00 PM the ritual ground was prepared for the dance with sacrifices and requests made to the spirits for their consent of this dance for Arjuna and me. 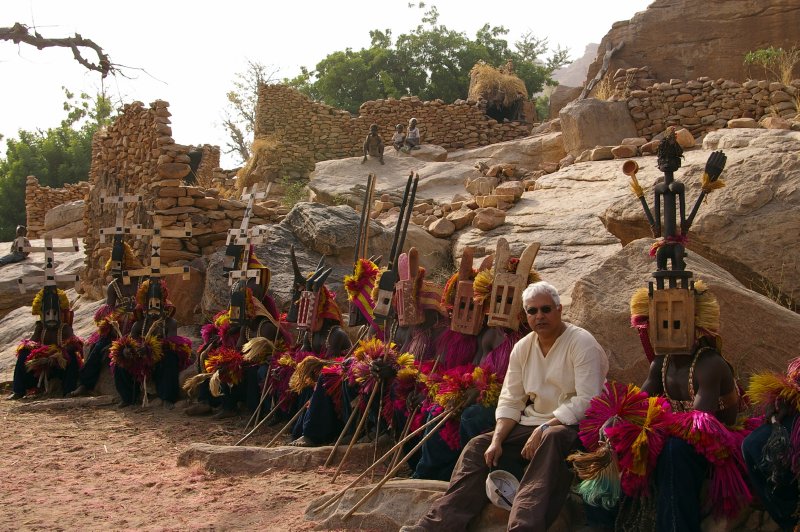 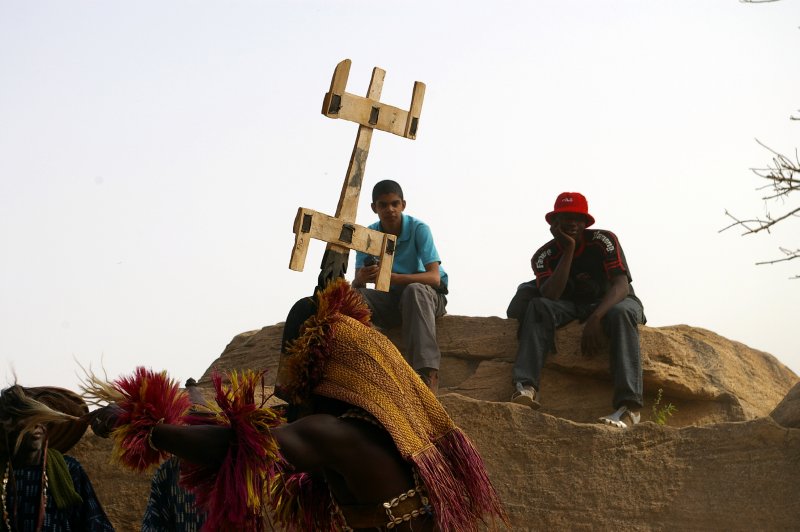 I was so taken by the whole event that I purchased a dance mask worn by one of them for $200, a large sum of money in Mali. The mask was so big that it would not fit in any of our soft duffels. That evening I had someone hacksaw it in half which I reassembled back home.

Hope the Dogon keeps their traditions. Islamic leaders want to rid them of their Pagan rituals. More Dogons are converting to Islam every day and these dances will soon only be found on the stages of Paris and New York. Arjuna and I are blessed. 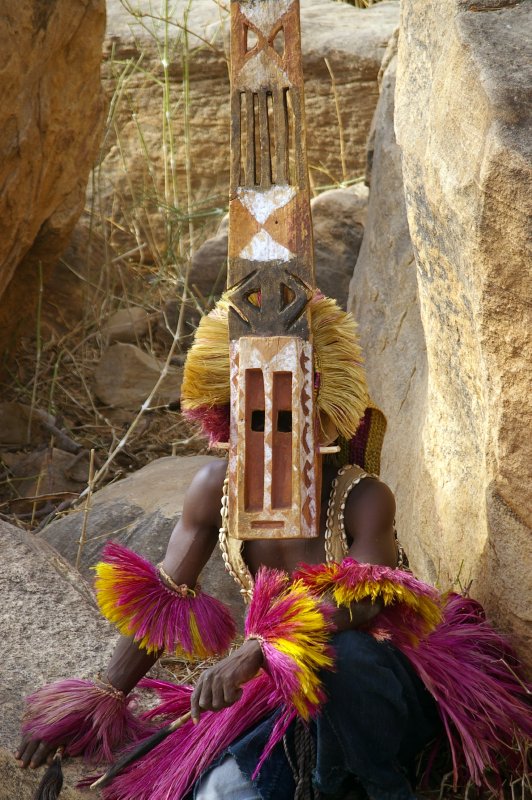 What an adventure! And the blog is such a learning experience for us all- and what excellent photos!
This is something that you and Arjuna will remember forever!
Thank you for your efforts, Ram!

Good blog. I think I remember the Tuareg pics. They were amongst the best from your travels.

Wonderful read early in the morning, amazing people, culture.great photographs, holding those huge masks with their teeth! My goodness!

This brought on some great memories... I used to be scared watching some rituals in Ivory Coast when I was a little girl.
Thanks for sharing these beautiful pictures.

I can imagine a cute French girl amidst the Bambara dancers.

A private dance of a sacred ritual just for you and Arjuna! Blessed you are!! You have earned these blessings through your commitment to traveling and honoring exotic destinations. I am proud of you dear friend.